Ligament Injuries: A comprehensive study of how these injuries should be treated 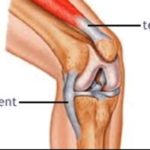 It is hard to walk on the leg after an ACL tear. The knee will get swollen in a couple of hours along with severe pain with weight bearing and bending of the knee. The first two days are usually the worst, so if surgery is required, it may be postponed until the swelling has decreased. At the same time an ACL tear occurs, it is not unusual for there to be an injury to the cartilage (meniscus) of the knee.