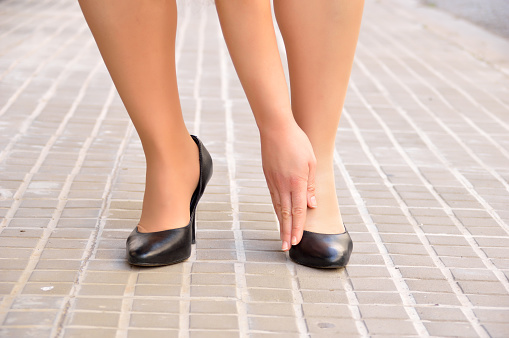 I didn’t schedule an appointment with a podiatrist until the pain in my right big toe had morphed into an excruciating jolt that shot through my foot with every step I took. Diagnosis: a bunion. Surgery involving a bone saw and screws was the only lasting solution, and since I needed to be able to walk for the rest of my life, I signed up. During my four weeks of recovery, I wore a black surgical boot that required me to explain my bunion saga over and over again to strangers and friends alike. That’s when the floodgates opened. In practically every conversation I had with fellow moms—working moms, stay-at-home moms, moms of all sizes and ages—they all grimaced, stuck out one of their feet and whispered, “Ugh, I have a bunion too.” It was like we were all part of an underground Bunion Fight Club, and the first rule was “Do not mention the B-word,” because only old ladies get bunions, right?

Wrong. “Seventy percent of women will develop a bunion—a painful, bony knob at the base of the big toe—and it often starts in one’s early 20s,” says orthopedic surgeon Carol Frey, M.D., director of foot and ankle surgery at West Coast Sports Medicine Foundation, in Manhattan Beach, California. The hormonal changes of pregnancy can predispose a woman to develop bunions or they can aggravate her existing ones. Read on to learn all about the bump that no mom wants to share on social media.

A bunion forms when the big toe begins angling toward the second toe, rather than pointing straight ahead. It can be caused by years of wearing pointy-toed shoes, having flat feet, or just bad genetic luck. “As the big toe moves over, the corresponding foot bone pushes outward and the joint is no longer in alignment,” explains podiatric surgeon Marlene Reid, D.P.M., who has a private practice in Naperville, Illinois. Over the years, the alignment of the bones gradually worsens and the bunion bump grows. Some women never feel pain; over time, most will experience varying degrees of aching, friction from their shoes, swelling, redness, inflammation, and, eventually, arthritis. This happens because the big toe joint absorbs much of the pressure from your weight when you walk.

“During pregnancy, the hormone relaxin relaxes ligaments throughout the body so that the pelvis can expand to accommodate the baby’s head,” says Dr. Frey, a spokesperson for the American Academy of Orthopaedic Surgeons. “But it also affects the ligaments that hold the bones of the feet together. As these ligaments relax, our arches fall and our feet spread out.” The outcome, besides your spending more time on Zappos.com? Flatter feet, which are more likely to pronate (or roll inwards) when walking. That added pressure on the big-toe joint can start the bunion-fication process, and the next thing you know, your big toe is hovering over its neighbor like a helicopter parent.

“I used to call it my Frankenfoot because it looked like my foot was trying to grow another big toe,” recalls Jessica Leichsenring, a mother-of-three from Lake Charles, Louisiana, whose bunion, which she first noticed before having kids, worsened with every pregnancy. “After my second baby, I couldn’t wear regular shoes—I needed wide ones. After my third, my foot hurt so badly that I developed a way of walking that didn’t require me to use the ball of my foot.”

Existing bunions won’t necessarily get larger during pregnancy, but because your feet can swell due to increased blood volume, shoes that used to fit often feel torturous by month seven. And while no woman needs another reason to stress over pregnancy weight gain, even 20 to 25 pounds puts more of a load on your arches. As with most things, you may have your mother to thank for a bunion; if she had one, there’s a 70 percent chance her children will develop one too. Leichsenring often jokes that her family should coordinate its reunions with those of the American Podiatric Medical Association.

But it’s the combination of genetics and tight, pointy shoes that makes Bunionville an achy, throbbing town of mostly women. “After all, these shoes force the front of the feet into a triangular position,” says Johanna Youner, D.P.M., a podiatrist and foot surgeon in New York City. And as anyone who has spent time with a toddler and a shape sorter could guess, trying to force a rectangular foot into a triangular slot is likely to end with lots of whining and tears.

How are bunions treated?

Because moms frequently put themselves last on the list for health care, they tend to avoid dealing with a bunion until the pain is awful. “Unfortunately, the longer you wait to treat it, the worse it can get, ” says Dr. Reid. Leichsenring finally went to the podiatrist with two of her three kids in tow—but balked when he recommended surgery that would require her to be off her feet for more than a month. “My youngest was a toddler and our middle child was nicknamed Hurricane Casey,” Leichsenring says. “How was I going to be on bed rest for weeks and weeks?”

Some people pad their bunion or use a splint to straighten the big toe; both can offer temporary relief but take up precious space in already too-tight shoes. Icing and cortisone shots can also ease inflammation. And to help prevent bunions during pregnancy, you can wear over-the-counter shoe inserts that keep your arches from falling. If your feet are already flat, you’ll need custom foot orthotics in order to prevent the bunion from worsening and to provide significant improvement for your foot pain, says Dr. Reid. A podiatrist can measure you and then order a pair of orthotics for your sneakers and another for dress shoes. Custom ones are often covered by insurance, and they can range from $500 to $600 a pair.

Surgery should be the last option

However, if these methods don’t stop the pain, you may need surgery. I’ll spare you the grisly details and just say that the surgery is usually outpatient and involves opening up the big-toe joint, then cutting and repositioning the bones. All bunion surgeries will have you off your feet for a few days to a few weeks, and wearing a surgical boot for about four weeks. The success rate hovers around 90 percent.

Leichsenring ultimately had her bunion corrected several years ago, when her youngest child was 4. Even though her left foot is now outfitted with “heavy artillery”—five screws and a metal plate—she’s pain-free and thrilled with the results. She says it’s important to arrange to have plenty of help from family and friends, as you’ll be spending time with your foot elevated and may not be able to drive. “It’s great to have shoe options other than ‘extreme wide’ and ‘flip-flop,’ and to stand, walk, run, and dance like a normal person,” she says. “Plus, I no longer scare other women when I’m getting a pedicure.”